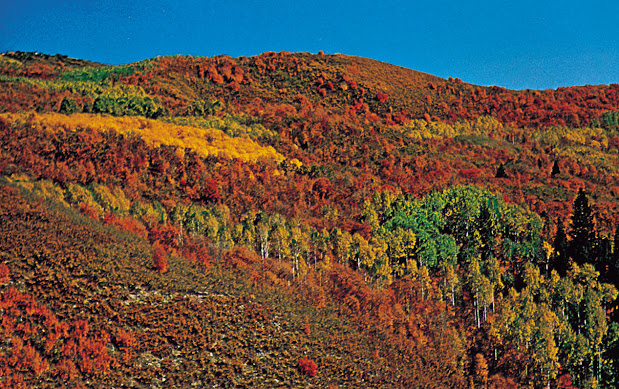 The biome of the temperate deciduous woodland is split into five zones. The height of the trees determines the zone levels.

The temperate deciduous forest derives its name from the fact that the temperatures aren't too hot or too cold.

Temperate deciduous woods get 30 to 60 inches of rain each year, making them the second-wettest biome after the rainforest.

Of course, the trees in the temperate deciduous forest are deciduous. The color of their leaves changes with the seasons and ultimately falls to the ground in the winter.

Each of the four seasons is clearly distinguishable and lasts approximately three months.

The soil is extremely fertile and rich in nutrients since there are deciduous trees here.

The sap of many trees in the temperate deciduous forest is used to prevent their roots from freezing during the winter.

Because certain insects in the temperate deciduous biome are unable to withstand the winter, they lay eggs before dying. These eggs will survive the winter and hatch in the spring.

The temperate deciduous woodland biome is home to many creatures such as black bears, wolves, and coyotes.

The majority of the creatures in this biome are camouflaged with the ground, allowing them to blend in and avoid predators.

To cope with the ever-changing seasons, animals in this biome must be highly adaptable.

Animals in this biome rely on the trees for refuge, food, and water.

In the autumn, the leaves of deciduous trees turn a different color because the plant or tree ceases generating chlorophyll, the green pigment that gives them their color.

March 04, 2018
The desert biome is a kind of environment that develops as a result of the low amount of rain it gets each year. Deserts encompass about 20% of the Earth's surface. In this biome, there are four kinds of desert: hot and dry, semiarid, coastal, and cold. They can all live among the plant and animal species that can thrive there. Facts about the Desert Biome: Although the desert biome's daily temperatures are very scorching, the biome's nighttime temperatures may be quite chilly. The Sahara Desert is the desert biome's biggest desert. It has a total area of approximately 300 million square miles. Because the desert biome's flora does not grow very tall, it can only support tiny creatures, rodents, and reptiles. These creatures may hide from the sun by burrowing in tunnels or beneath tiny scrubs. Many desert creatures are nocturnal, resting during the day and emerging at night when conditions are more bearable. Because there is little standing water in the desert biome
Post a Comment
Read more

Facts about the Savanna Biome

December 31, 2020
The savanna biome is characterized by a dry season followed by a rainy season. They're in the middle of a meadow and a woodland. They may also be found in the same biome as other biomes. In Africa, South America, India, and Australia, savannas may be found. Facts about the Savanna Biome: The savanna biome is mainly made up of grass, with a few trees thrown in for good measure. Many grazing animals take advantage of the plentiful food source on the savanna because of the abundance of grass. Elephants, zebras, gazelles, and buffalo are among the herbivores found in the savanna biome. Africa is home to the majority of the savanna biome. The savanna covers almost half of Africa. The availability of food varies throughout the year due to the savanna biome's long periods of wet and dry climate. During the dry season, some animals spend so long without water that they barely make it to the rainy season alive. Rainfall averages 59 inches in the savanna habitat. The majority of this tak
Post a Comment
Read more